skip to main | skip to sidebar

The ball that lost its bounce 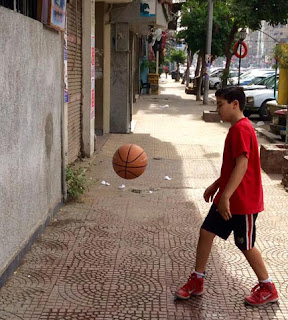 In Egypt, the disparity between the haves and the have-nots is so great that it is easy for small moments to hold big lessons.
Last evening (also known as ‘afternoon’ in Egypt), the boys are I were on our way to the club for Ziad’s basketball training. Nazar, who was coming along to shoot hoops, wanted to stop at the local tyre shop on the way to pump up his ball, which was slightly deflated and had lost much of its bounce.
We weaved our way through the streets towards the tyre shop, Nazar bobbing happily along with a couple of pounds in his pocket to give as a tip to the man who would dispense the air. Arriving only to find the shop closed for the day, disappointment immediately took hold as Nazar realized that he would now be stuck with a sub-par ball for the night.
There were only a few seconds to turn this around before disgruntlement set in. “It doesn’t matter,” I told him. “You can just practice your shooting tonight.”
“But I still have to dribble the ball up to the net,” he grumbled.
“Sometimes in life you just have to make do,” I said. “Maybe Captain Islam (the coach) can pump it up for you when we get there.”
His shoulders hunched over as he shuffled along in discontent. “I don’t know if he has the thing to stick in the ball to pump it up.”
“Well maybe you can use one of the club’s balls for tonight.”
“Their balls aren't very good. Now I'll have nothing to do while Ziad's training.” He wasn't sure who to blame but it was clear a large dose of grumpiness would be upon us momentarily.
“Look,” I told him, “this is a less-than-optimal situation, but there’s nothing we can do about it tonight. Maybe this happened to remind you to be patient. You have a great ball and we’ll put air in it tomorrow. You only have to use a flat ball for one night. Some of the kids always have to use a ball that isn't as good as yours. Plus, you have lots of people who love you. And lots of people who you love. You have a full tummy. You have a great life.”
He took a few seconds to think about it. “I am pretty lucky. I can just practice my layups tonight.”
A couple more seconds of thinking and then, “Can I keep the two pounds to buy something?”
“Sure. See, something good has come out of it. Just remember that you are luckier that 99% of kids in Egypt. Always try and look at the big picture.”
“It’s actually good that this happened,” he said “because now I have two extra pounds to spend at the kushk.”
And his bounce was back.

Posted by Emily Richardson at 10:29 PM

Emily Richardson
Australia
Australian (and now also Egyptian!) author of The Nile is a Road